The second use of ovulation induction was to increase the number of eggs reaching maturity in a single cycle to increase chances for conception. The initial agents for this treatment (used first for IVF and only later for simpler treatments) were injectable medications. These agents carry an increased risk of multiple gestation, ovarian hyperstimulation, and increased cost and time commitment. 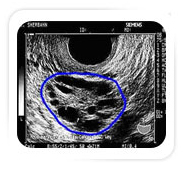 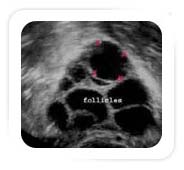 Figure is about Ultrasound photo of a polycystic ovary after Clomid treatment. Some mature size follicles are now present, as well as some small ones

These medications include clomiphene citrate. This oral drug promotes growth of the fluid-filled sacks (follicles) containing the eggs. If you do not ovulate, or you ovulate and do not become pregnant after clomiphene therapy, other medications may be prescribed either alone or in combination. These drugs, called gonadotropins, are taken by injection under the skin. They replace natural follicle stimulating hormone (FSH) and, if they are successful, the ovaries produce multiple follicles and high quality, mature eggs. HCG or Human Chorionic Gonadotrophin is a drug which enables the egg to further mature. It also aids the release of the egg in the follicle. Timed intercourse will be suggested so that sperm will be present when the egg is released from the follicle, in order for fertilization to take place in the fallopian tube.


How is induction of ovulation performed in India?

Ovulation induction, in ovulatory women, is always combined with intrauterine insemination. Ovulation induction should only progress after a complete and thorough evaluation. All underlying hormonal disorders (such as thyroid dysfunction) should be treated prior to resorting to ovulation induction with fertility drugs

A careful selection of treatment regimens combined with diligent monitoring can bring excellent results. For women with ovarian failure or extremely very poor quality eggs there is not currently any drug available to allow a reasonable chance of conception with any type of ovarian stimulation. Egg donation is the only realistic option for getting pregnant with premature ovarian failure.

Success rates for induction of ovulation vary considerably and depend on the age of the woman, the type of medication used, whether there are other infertility factors present in the couple, etc..