What is Sarcoma Cancer?

Treatment of Sarcoma Cancer in India


What is Sarcoma Cancer ? 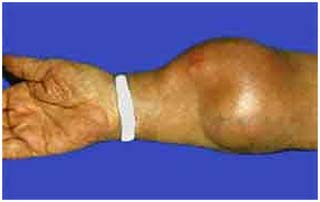 A sarcoma is basically a cancer that is of the connective or supportive tissue, which are basically a bone, cartilage, fat, muscle, blood vessels and soft tissue. This term is derived from the Greek word, which means 'fleshy growth'. Sarcomas are also referred to Bone tumours but they belong to an entirely different category, due to their different experimental and infinitesimal distinctiveness and they are also treated another way. One of the most common childhoods bone cancers are known as Osteogenic sarcoma or osteosarcoma. In adults Soft tissue sarcomas are seen as being more common than would be usually found in children.

There are many types of soft tissue sarcoma, and they tend to grow and develop differently. The most common types are described below. Your doctor will be able to give you more details about which type of sarcoma you have. Each type of sarcoma is named after the type of cell from which it has grown, rather than the part of the body in which it started.


Fibrosarcoma  -  Fibrosarcoma is a malignant tumor that arises from fibroblasts (cells that produce connective tissue). This is a type of sarcoma that is predominantly found in the area around bones or in soft tissue.

Myxofibrosarcomas  -  This is a type of fibrous sarcoma and the most common type of sarcoma in older people. They were previously called malignant fibrous histiocytomas (MFH). It is not clear which type of cell they start from. Myxofibrosarcomas can affect any part of the body, but most commonly occur in the arms or legs.

Desmoid tumors  -  Desmoid tumors arise from connective tissue - the cells involved with the formation of muscle, fibrous and nerve tissue. Desmoid tumors, also called aggressive fibromatoses, are locally aggressive. This means that they can grow into and even destroy adjacent normal tissues, even bones. They do not, however, have the capacity to spread distantly (metastasize) throughout the body. Hence, most doctors consider desmoid tumors to be benign and not malignant.

Liposarcomas  -  These sarcomas start in the body’s fat cells. They can grow anywhere in the body and most commonly affect middle-aged people. Some grow very slowly (taking many years to develop) and others more quickly.

Synovial sarcomas  -  Synovial sarcomas usually start near to joints, such as the knee or elbow, but can occur in any part of the body. They usually appear as hard lumps and are more common in younger adults.

LeiomyosarcomasLeiomyosarcomas start from smooth muscle that is not under our conscious control. Smooth muscle is also called involuntary muscle and forms the walls of the womb, stomach, intestine and the blood vessels. Leiomyosarcoma is one of the more common types of sarcoma and can occur anywhere in the body.

Malignant peripheral nerve sheath tumours (MPNST)These sarcomas arise in the cells that cover nerve cells and can occur anywhere in the body. The cells around the nerve cells are called schwann cells. MPNST can also be called malignant schwannomas or neurofibrosarcomas. They most commonly occur in people who have a rare genetic disorder called neurofibromatosis (von Recklinghausen’s disease).

Gastrointestinal stromal tumours (GIST)GISTs are sarcomas that develop from the connective tissues in the walls of the digestive system. The digestive system is often called the gastrointestinal (GI) tract. This type of tumour may also be called GI stromal sarcoma. They behave differently from other types of sarcoma and are treated very differently.

Kaposi's sarcoma (KS)Although Kaposi’s sarcoma is a type of sarcoma, it differs from other sarcomas in the way it develops. It starts from cells in the skin. Coloured patches or lumps can develop in the skin, in the mouth, and in the lymph nodes or internal organs such as the lung, liver or spleen.


Other sarcomasThere are other, much rarer, types of sarcoma. These include:

There are a few rare genetic conditions that can increase your risk of getting a sarcoma. These are
It is very unlikely that any of these conditions run in your family and you do not know about it. Any genetic condition can crop up in a family that has not had it before. But this is extremely rare. It happens because the same genetic fault that causes the disease to run in families has occurred randomly in a developing baby.

Neurofibromatosis is a genetic disease that causes non cancerous (benign) tumours to form in the nerves under the skin and in other parts of the body. But the risk of getting a very rare sarcoma called a malignant peripheral nerve sheath tumour is increased. About 15% of people with neurofibromatosis will have one of these cancers.

Exposure to chemicals Several chemicals are thought to be linked to sarcomas. These include:

Sometimes people think that an injury has caused a cancer. There is no evidence that an injury of any kind can cause a sarcoma. Because of the swelling, an injury may lead to a cancer that was already there being diagnosed. Cancers take many years to develop. In most cases where people think an injury responsible, the injury has only happened recently and so is unlikely to be linked to the cancer.

The only reliable way to determine if a soft tissue tumor is benign or cancerous is through a surgical biopsy. During this procedure, your doctor makes an incision or uses a special needle to remove a sample of tumor tissue. A pathologist examines the tissue under a microscope. If cancer is present, the pathologist can usually determine the type of cancer and its grade. The grade of the tumor is determined by how abnormal the cells appear when examined under a microscope. The grade predicts the probable growth rate of the tumor and its tendency to spread. Low-grade sarcomas, although cancerous, are unlikely to metastasize or spread. High-grade sarcomas are more likely to spread to other parts of the body.


Treatment of Sarcoma Cancer in India Treatment options for soft tissue sarcomas include surgery, radiation therapy, and chemotherapy. The specific treatment plan for your child will depend on the stage of the cancer, which is based on size and grade of the tumor and whether it has spread to other parts of the body.