What is Lung Cancer?

Treatment of Lung Cancer in India


What is Lung Cancer?

Lung cancer starts in the cells of the lung .The lungs are in the chest on either side of the heart. The right lung has 3components or lobes and the left lung 2 lobes. Air is inhaled through the nose and throat and flows past the voice box (larynx) into the windpipe (Trachea).The windpipe divides into 2tubes the left and right bronchi which supply air to each lung within the lung the tubes get smaller and smaller (bronchioles)until they reach air sacs(alveoli) The alveoli’s job is too add oxygen to the blood and to take waste gases out. The waste gas is removed from the body as exhale. 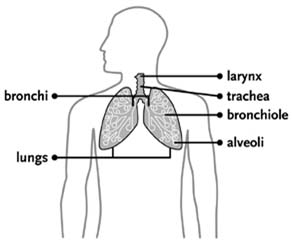 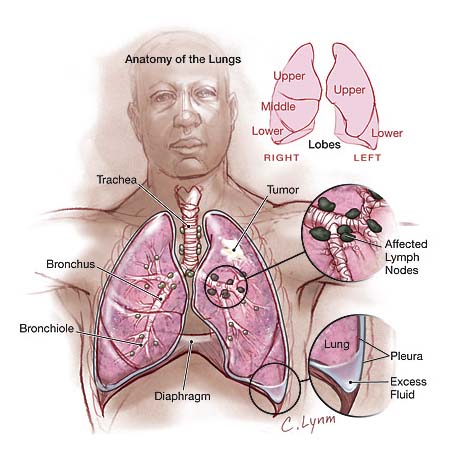 Tobacco Smoking:  By far the most prominent risk factor is tobacco smoking. More than 80% of lung cancers are thought to result from smoking. The longer a person has been smoking and the more packs per day smoked, the greater the risk. If a person stops smoking before a cancer develops, the damaged lung tissue starts to gradually return to normal. Even after ten years, the ex-smoker's risk still does not equal the lower risk of a person who never smoked. However, an ex-smoker's risk is about half the risk of people who continue to smoke.

Nonsmokers who breathe in the smoke of others (also called second hand smoke or environmental tobacco smoke) are also at increased risk for lung cancer. A nonsmoker who is married to a smoker has a 30% greater risk of developing lung cancer than the spouse of a nonsmoker.

Radon:   Radon is a gas found in the soil in many parts of the country. Radon can enter a building through cracks in the foundation or insulation, or through drains or walls. People who have a high exposure to radon at home, school and work are at higher risk of lung cancer.

Asbestos:   Asbestos is found is many workplaces and homes. In the past, it has been used in oven, brake pads, insulation, and many other industrial products Death from lung cancer is about seven times more likely to occur among asbestos workers than among the general population. Exposure to asbestos fibers is an important risk factor for lung cancer.

Marijuana:   Marijuana cigarettes contain more tar than tobacco cigarettes. Also, they are inhaled very deeply and the smoke is held in the lungs for a long time. Medical reports suggest marijuana may cause cancers of the mouth and throat.

Recurring Inflammation:   Tuberculosis and some types of pneumonia often leave scarred areas on the lung. This scarring increases the risk of the person developing the adenocarcinoma type of lung cancer.

Talcum Powder:   While no increased risk of lung cancer has been found from the use of cosmetic talcum powder, some studies of talc miners and millers suggest a higher risk of lung cancer and other respiratory diseases from their exposure to industrial grade talc.

Personal and Family History:   People who have lung cancer have an increased risk of another lung cancer. Brothers, sisters and children of those who have had lung cancer may have a slightly higher risk of lung cancer themselves. However, it is difficult to say how much of this excess risk is due to inherited factors and how much is due to environmental tobacco smoke.

Other Mineral Exposures:   People with silicosis and berylliosis (lung diseases caused by breathing in certain minerals) also have an increased risk of lung cancer.

Vitamin A Deficiency or Excess:   People who do not get enough vitamin A are at increased risk of lung cancer. On the other hand, taking too much vitamin A may also increase lung cancer risk.

Air Pollution:   In some cities, air pollution may slightly increase the risk of lung cancer. This risk is far less than that caused by smoking.

Lung cancer often does not produce symptoms in the early stages. When symptoms do occur, they are a result of tumor growth, pressure and invasion on nearby structures and nerves, regional growths or metastasis.


If the cancer has metastasized and traveled to other parts of the body, the symptoms may include:

If lung cancer is suspected, the person will have their medical history taken, a physical examination, and a variety of tests to confirm the diagnosis.

During the physical exam, the doctor will look for lymph node enlargement in the neck or in the region above the collarbones, liver enlargement, abnormal abdominal enlargement, and signs of a lung mass. The tests may include the following:

Once the diagnosis of lung cancer is made, further staging studies are done to determine the spread of the disease and the appropriate treatment method. These studies include computed tomography (CT or CAT scan), a bone scan and a PET scan.

The CT/CAT scan is a series of x-rays taken as a scanner revolves around the body. A computer then receives the x-ray images and creates a cross-sectional picture of the area being examined.

A bone scan, also called a radionuclide or nuclear medicine scan, involves injecting a radioactive substance into the body. An instrument then scans the body to measure radiation levels. A PET scan is similar to a bone scan except it gives information on all the organs of the body. It is especially useful to determine if the lung cancer has spread outside of the lung. It is important to realize, though, it is not 100% accurate; for example areas of cancer that range 0.6 centimeters to one centimeter will often not be visible on PET scan.

Once the additional tests are done, the doctor will determine what stage the cancer is in and base treatment decisions on this information.


Treatment of Lung Cancer in India 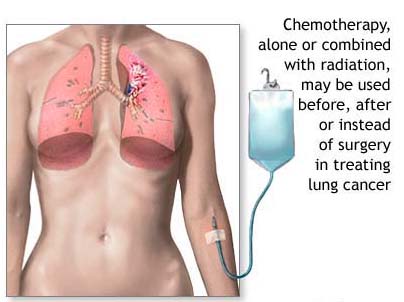 Standard treatment for patients with lung cancer is of limited effectiveness in all but the most localized tumors. For this reason, patients are encouraged to consider participating in clinical trials (research studies) designed to evaluate new approaches to therapy.

Surgery, radiation therapy and chemotherapy (used alone or in various combinations) are the standard methods used to treat lung cancer. The choice of treatment depends on many factors, including the type of tumor, the extent of the disease when it is diagnosed, the age and general health of the patient and other variables. The first question to ask is whether the lung cancer is caught at an early enough stage to allow for surgery with curative intent.

Some patients first receive external therapy to a wide area that includes the primary tumor and surrounding tissue. After the initial treatments, a smaller area is treated and a final treatment area that may be quite small. Radiation here is referred to as a "boost." Like surgery, radiation therapy is called local treatment, because it affects only the cells in the area being treated.