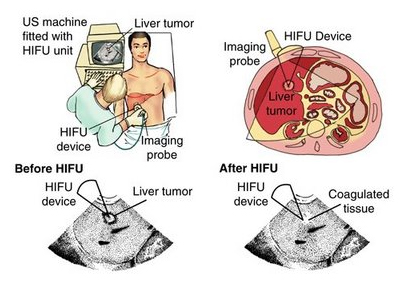 There has been a great deal of experience in the treatment of primary liver tumours in Far East. Research has suggested that, for tumours which are not amenable to surgery, treatment with HIFU and embolisation (blocking the blood vessels which feed the tumour) may improve survival when compared to current therapies.

The treatment of secondary tumours has been shown to be feasible based on the work performed in Far East.

Hepatocellular Carcinoma (HCC) Is One Of The Most Common Human Malignancies. Surgery And Liver Transplantation May Be Curative For Early Stage HCC, But They Can Only Be Performed In 20% Of Patients. The Prognosis For Patients With Untreated HCC Is Very Poor, With A Range Of Overall Median Survival From 1.6 To 6 Months. High-Intensity Focused Ultrasound (HIFU) Is A Novel, Non-Invasive Therapy Which Has Been Used To Treat Patients With HCC In India Since 1998. It Can Be Performed Not Only In Surgical Candidates Whose Lesions Are Less Than 5cm In Diameter, But Also In Patients With Large-Volume, Unresectable HCC. In This Latter Group, HIFU Can Be Used Alone Or In Combination With Transcatheter Arterial Embolisation (TAE), Either As A Primary Therapy, Or After Standard Treatments Have Failed. Studies Have Shown That This Has A Positive Survival Advantage Compared To Trans-Arterial Chemo-Embolisation (TACE) Alone.


Treatment may be either with curative intent (as primary treatment or after other forms of therapy) or with palliative intent (to debulk tumours or reduce pain of malignant origin). 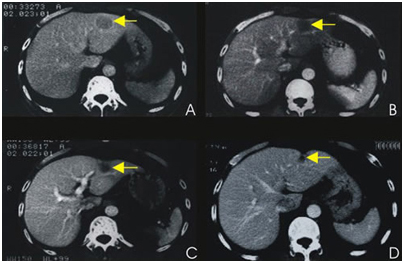 Fig.3 Gadolinium-enhanced MRI scans of a 62-year-old patient with HCC who received a single session of both TACE and HIFU. A) Before TACE. The tumour is 11cm long in size, and located in the right lobe of the liver. The tumour shows good contrast uptake, indicating perfusion (arrow); B) Four weeks after TACE. The perfusion of the tumour is reduced, but not absent (arrows). C) Two weeks after HIFU, absent contrast uptake with the target tumour (arrows).

Fig.4 Gadolinium-enhanced MRI of a patient who underwent a single HIFU session, at which two foci of HCC were targeted, one close to the diaphragm, another close to the interior vena cava. A1-2) Pre-HIFU. Two lesions present in the right lobe of the liver (arrow). B1-2) Two weeks post-HIFU. Absence of contrast uptake, indicating coagulation necrosis in both foci (arrow).

Fig.5. Gadolinium-enhanced MRI obtained in a patient with metastatic liver cancer before and after HIFU treatment. A) Before HIFU, two large tumour foci are present, located in the left and right lobe of the liver (arrow). B) Two weeks after HIFU, absence of contrast uptake, indicating coagulation necrosis in both foci (arrow).