What is Head and Neck Cancer?

Types of Head and Neck Cancer

Causes of Head and Neck Cancer

Symptoms of Head and Neck Cancer

Diagnosis of Head and Neck Cancer

Treatment of Head and Neck Cancer


What is Head and Neck Cancer ?

Oral cavity (mouth) : The oral cavity includes the lips, the front two-thirds of the tongue, the gingiva (gums), the buccal mucosa (lining inside the cheeks and lips), the floor (bottom) of the mouth under the tongue, the hard palate (bony top of the mouth), and the small area behind the wisdom teeth.

The pharynx has three parts:

o Nasopharynx: The nasopharynx, the upper part of the pharynx, is behind the nose.

o Oropharynx: The oropharynx is the middle part of the pharynx. The oropharynx includes the soft palate (the back of the mouth), the base of the tongue, and the tonsils.

o Hypopharynx: The hypopharynx is the lower part of the pharynx.

Larynx ("Adam's apple" or voice box): The larynx, also called the voicebox, is a short passageway formed by cartilage just below the pharynx in the neck. The larynx contains the vocal cords. It also has a small piece of tissue, called the epiglottis, which moves to cover the larynx to prevent food from entering the air passages.

The salivary glands produce saliva, the fluid that keeps mucosal surfaces in the mouth and throat moist. There are many salivary glands: the major ones are in the floor of the mouth, and near the jawbone 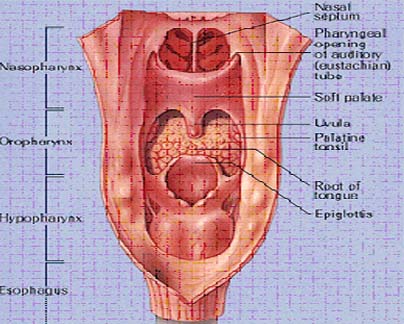 The types of Oral Cancer are:

Tumors of the Oropharynx

Tumors of the Nasal Cavity and Paranasal Sinuses


Causes of cancer of the head and neck

Cancers of the head and neck are more common in men than women. In some cases (for example, salivary gland cancers, sarcomas and lymphomas) the causes are unknown.

Other risk factors include the following:


Symptoms of Head and Neck Cancer

These are common symptoms of head and neck cancer in general:

How head and neck cancers are diagnosed ?

At the hospital, the specialist will ask you about your current symptoms as well as your medical history, and will want to know if you are taking any medicines. The doctor will then examine your mouth, throat and neck.

Nasendoscopy for Head and Neck Cancer

In order to examine your throat and neck, the doctor may use a small mirror held at the back of your mouth. The doctor may also pass a nasendoscope (a very thin flexible tube with a light at the end) into your nose to get a better view of the back of the mouth and throat.

These tests can be uncomfortable for you, but will only last a few minutes. You may be given a local anaesthetic lozenge to suck, which numbs the mouth for a few minutes. Instead, the area may be sprayed with an anaesthetic spray, which numbs the back of your throat. If you do have a local anaesthetic in your throat, you shouldn't eat or drink anything for about an hour afterwards, until your throat has lost the numb feeling. Otherwise there is a risk of things going into your windpipe when you swallow. You could also scald your mouth or throat with hot drinks.


Biopsy for Head and Neck Cancer

The doctor can only make a definite diagnosis by taking a sample of cells from the abnormal area to examine under a microscope. This procedure is called a biopsy.

Sometimes the biopsy can be taken in the clinic. The affected area is first numbed with some local anaesthetic. A small piece of the suspected cancer is then removed using a very fine needle or a special pair of tweezers (biopsy forceps). However, it is more likely that a biopsy will be taken whilst you are asleep under a general anaesthetic. This allows the specialist to examine the mouth and throat area closely and take biopsies from any other suspicious areas..

By looking at the sample of cells under the microscope, the doctors will be able to tell if cancer cells are present. They will also be able to find out the type of cancer; for example, whether it has begun in the cells lining the mouth and throat (squamous cells).

This is a quick, simple procedure that is done in the outpatient clinic. Using a fine needle and syringe, the doctor takes a sample of cells from a lump and sends it to the laboratory to see if any cancer cells are present. An FNAC may be quite uncomfortable and the area may be bruised for a week or so afterwards.


Microcytoscopy for Head and Neck Cancer

This is a new test that is still being evaluated in research. It is sometimes used for people with pre-cancerous conditions who need to have regular biopsies. Instead of having biopsies a small amount of blue dye is painted onto the abnormal area, which is then very closely looked at using a microscope. Microcytoscopy should not be painful although it may be a little uncomfortable.


Treatment used for head and neck cancer in India

There are three main types of treatment for head and neck cancer:


Two other treatments may sometimes be used:


Sometimes the treatment of head and neck cancers will involve two or more treatments combined together:

Surgery is an important part of the treatment of head and neck cancers and aims to remove the cancer completely. The part of your mouth or throat that the doctor may remove depends on where the tumour is. Very small cancers can often be treated with a simple surgical operation under local or general anaesthetic, or with laser surgery, with no need to stay in hospital overnight.

If the cancer is larger, surgery will often involve a hospital stay and an operation under general anaesthetic. Sometimes the amount of surgery may involve more than one part of your head and neck, and may mean that you will have scars on your face or neck. Some people may also need to have reconstructive surgery to the face.

Sometimes laser surgery may be used to remove small tumours in the mouth and the pharynx. This may be combined with a light-sensitive drug (sometimes called a photosensitising agent) in treatment known as photodynamic therapy (PDT).

A type of surgery called micrographic surgery is being tested in research trials for cancers of the lip and oral cavity. The surgeon removes the cancer, and during the surgery the tissue that has been removed is examined under a microscope. This is to make sure that all the cancer cells are removed.

The surgeon may need to remove part of the mouth or throat lining and occasionally some facial skin. This can be replaced using a thick piece of skin taken from another part of the body – usually the forearm or chest. This is known as a skin flap.

If the cancer is affecting part of your jawbone, the affected bone may be removed with the tumour. In this case, you may need to have part of a bone taken from elsewhere in your body to replace the missing jawbone. This is known as a bone graft. Modern techniques enable you to move your jaw again straight after the operation.


Radiotherapy may be used alone, instead of surgery. It can also be used after an operation, to destroy small areas of cancer that could not be removed by the surgery. It may also be given in combination with chemotherapy, which is known as chemo-radiotherapy.


Radiotherapy can be given in one of two ways:

Treating head and neck cancer with chemotherapy in India

Chemotherapy may also be given to people whose cancer has spread to other parts of the body or whose cancer has come back after radiotherapy. It is used in this situation to try to shrink and control the cancer and relieve symptoms, to try to prolong a good quality of life. Read More>>

Treating head and neck cancer with photodynamic therapy in India

PDT uses a combination of laser light of a specific wavelength and a light-sensitive drug to destroy cancer cells.

The light-sensitive drug (the photosensitising agent) is injected into a vein. It circulates in the bloodstream and is taken up by cells throughout the body. The drug is taken up more by cancer cells than healthy cells. It is not activated until it is exposed to laser light of a particular wavelength. When a laser is shone on to the cancer, the drug is triggered to interact with oxygen, which then destroys the cancer cells.

There is a delay of four days between injection and the activation of the drug using the laser light. The laser light used in PDT is focused through a fibre-optic tube, and is shone for only a few minutes. The doctor holds the fibre-optic tube very close to the cancer so that the correct amount of light is delivered and the PDT causes the minimum amount of damage to normal, healthy cells.

In early-stage cancer of the head and neck PDT may be used to try to cure the cancer and is usually given as part of research trials.