What is Breast Cancer ?


What is Breast Cancer?

The term breast cancer refers to a malignant tumor that has developed from cells in the breast. The breast is composed of two main types of tissues: glandular tissues and stromal (supporting) tissues. Glandular tissues house the milk-producing glands (lobules) and the ducts (the milk passages) while stromal tissues include fatty and fibrous connective tissues of the breast. The breast is also made up of lymphatic tissue-immune system tissue that removes cellular fluids and waste.

There are several types of tumors that may develop within different areas of the breast. Most tumors are the result of benign (non-cancerous) changes within the breast. For example, fibrocystic change is a non-cancerous condition in which women develop cysts (accumulated packets of fluid), fibrosis (formation of scar-like connective tissue), lumpiness, areas of thickening, tenderness, or breast pain.

A risk factor is anything that makes it more likely you'll get a particular disease. Some risk factors, such as your age, sex and family history, can't be changed, whereas others, including weight, smoking and a poor diet, are under your control.

Other factors that may make you more susceptible to breast cancer include:

If you've had breast cancer in one breast, you have an increased risk of developing cancer in the other breast.

Between 5 percent and 10 percent of breast cancers are inherited.

The relationship between excess weight and breast cancer is complex. In general, weighing more than is healthy increases your risk, particularly if you gained the weight as an adolescent. But risk is even greater if you put the weight on after menopause. Your risk also is greater if you have more body fat in the upper part of your body.

If you got your period at a young age, especially before age 12, you may have a greater likelihood of developing breast cancer. Experts attribute this risk to the early exposure of the breast tissue to estrogen.

If you enter menopause after age 55, you're more likely to develop breast cancer. Experts attribute this to the prolonged exposure of the breast tissue to estrogen.

If your first full-term pregnancy occurs after age 30, or you never become pregnant, you have a greater chance of developing breast cancer. Although it's not entirely clear why, an early first pregnancy may protect breast tissue from developing genetic mutations that result from estrogen exposure.

Treating menopausal symptoms with the hormone combination of estrogen and progesterone for four or more years increases your risk of breast cancer.

But as the cancer grows, it can cause these changes:


Treatment decisions depend on these findings. The first step in the work-up of breast disease is usually a physical exam by a doctor or nurse practitioner. Mammography and ultrasound may be important additions to the physical examination. On the basis of these evaluations, the decision may be made to confirm a clinical impression with a tissue biopsy.

Screening Mammography :- A mammogram is a low-dose X-ray of the breast. This is the best test we have to screen women for breast cancer. A Screening Mammogram consists of two "pictures" of each breast. If an area on the mammogram looks suspicious or is not clear, additional mammograms with different views may be needed. Annual screening mammography is recommended for all women over 40 years old.

Diagnostic Mammography :- This is a mammogram used for problem-solving, rather than for screening. For instance, if a patient has a lump in her breast, a directed investigation of that area is performed. This is also done when a particular finding in the breast is being followed over time. A diagnostic mammogram is tailored to the patient's case and is carefully monitored by a radiologist, who interprets the images and determines whether there is any need for further tests.

Ultrasonography :- Using high-frequency sound waves, ultrasonography can often show whether a lump is solid or filled with fluid. This exam may be used along with Diagnostic Mammography or MRI to answer questions about a specific area of the breast. Because it uses sound waves instead of X-Rays, ultrasound provides information that is different and often complementary to the mammogram.

Breast MRI :- Magnetic resonance imaging (MRI) can be used to look specifically at the breast. Each exam produces hundreds of images of the breast, cross-sectional in all three directions (side-to-side, top-to-bottom, front-to-back), which are then read by a radiologist. It is non-invasive and no radioactivity is involved. The technique is believed to have no health hazards in general.

One way to find out if a breast lump or abnormal tissue is cancer is by having a biopsy. During a biopsy, a surgeon, a pathologist or a radiologist removes a portion or all of the suspicious tissue. The suspicious tissue is examined under a microscope by a pathologist who checks for cancer cells and makes the diagnosis. The following are different types of biopsies as well as how you can best prepare yourself for each of them.


The following are different types of biopsies:

Fine Needle Aspiration (FNA) Biopsy :- FNA samples a woman's lump using a thin small needle that leaves a mark no bigger than a needle stick from a blood test. FNA often allows us to diagnose a lump within two to three days

Stereotactic Core Biopsy :- This procedure was developed as a less invasive way to obtain tissue samples for diagnosis. It involves removing tissue with a biopsy needle while your breast is compressed in a way similar to a mammogram. This biopsy requires less recovery time than surgery and causes no significant scarring

Needle (Wire) Localization Biopsy :- This type of biopsy involves the use of a needle and wire to locate the abnormal tissue and surgery to remove it. Needle localization is performed when you have an abnormality on a mammogram that cannot be felt. It is an outpatient biopsy that is done in two steps on the same day.


Treatment of a Breast Cancer in India

Mastectomy in India Mastectomy is the surgical removal of a breast. Surgery is presently the most common treatment for breast cancer. Following mastectomy, immediate or delayed breast reconstruction is possible in many instances.

There are several different types of surgical procedures used to treat breast cancer. Depending on the location or surgeon who performs the procedure, different terms may be used.

In the past, radical mastectomy was the frequently performed on women with breast cancer. However, experts have found that modified radical mastectomy is equally effective in most cases, and therefore, it has become the most common type procedure for removing the entire breast. 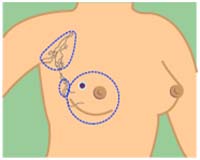 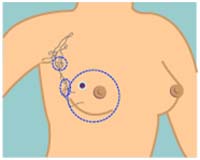 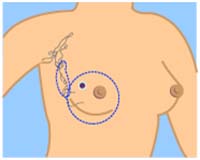 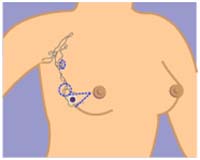 Axillary node dissection, the surgical removal of the axillary (armpit) lymph nodes, is usually performed on patients with invasive cancers. A radical mastectomy, modified radical mastectomy, or lumpectomy operation often includes axillary node dissection (this involves a separate incision for lumpectomy patients). After surgery, the axillary lymph nodes are examined under a microscope to determine whether the cancer has spread past the breast and to evaluate treatment options.

Side effects of axillary node dissection:

Lumpectomy is the surgical removal of a cancerous lump (or tumor) in the breast, along with a small margin of the surrounding normal breast tissue. Lumpectomy may also be called wide excision biopsy, breast conserving therapy or quadrantectomy (this latter term is used when up to one fourth of the breast is removed). The procedure is often performed on women with small or localized breast cancers and can be an attractive surgical treatment option for breast cancer because it allows women to maintain most of their breast after surgery. Several studies have shown that women with small breast tumors have an equal chance of surviving breast cancer regardless of whether they have a lumpectomy, followed by a full course of radiation therapy, or mastectomy (complete breast removal, which generally does not require post-operative radiation treatment).

Radiation Therapy for the Treatment of Breast Cancer in India