When the cervical disease encompasses more than just the disc space, the surgeon may recommend removal of the vertebral body as well as the disc spaces at either end, to completely decompress the cervical canal. This procedure, a corpectomy, is often performed for multi-level cervical stenosis.

For patients whose pain does not improve with non surgical treatments, surgery may be necessary. The treatment's goal is to relieve pressure on the nerve roots or on the spinal cord by removing the ruptured disc and vertebral body . After a skin incision is made, only one thin muscle needs to be cut, after which anatomic planes can be followed right down to the spine. This procedure is usually done under microscopic visualization. The limited amount of muscle transection or dissection helps to limit postoperative pain. 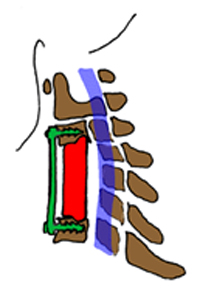 The expected outcome from decompression/fusion procedures of the neck is good. Similar to a discectomy, the risks and possible complications include: The small nerve that supplies stimulus (innervation) to the vocal cords, the recurrent laryngeal nerve, will sometimes not function for several months after surgery because of retraction during the procedure, which can cause temporary hoarseness. Retraction of the esophagus can also produce temporary difficulty with swallowing (1 to 2 weeks).

However, a corpectomy is a more extensive procedure and is usually performed for more severe disease. The risks are therefore greater in corpectomy than discectomy. The risk that surgeons worry about the most is compromise of the spinal cord that can lead to complete or partial quadriplegia. To help manage this risk, the spinal cord function is often monitored during surgery by Somatosensory Evoked Potentials (SSEP's). SSEP's generate a small electrical impulse in the arms/legs, measure the corresponding response in the brain, and record the length of time it takes the signal to get to the brain. Any marked slowing in the length of time may indicate compromise to the spinal cord.

There is also a slight risk that while removing the vertebral body the vertebral artery that runs on the side of the spine may be violated, which can lead to a cerebrovascular accident (stroke).

Patients will feel some pain after surgery, especially at the incision site. While tingling sensations or numbness is common, and should lessen over time, they should be reported to the doctor. Most patients are encouraged to be up and moving around within a few hours after surgery. After surgery, your doctor will give you instructions on when you can resume your normal daily activities. After corpectomy, external immoblization is generally used to augment the internal stabilization of the plates.

Often patients are encouraged to maintain a daily low-impact exercise program. Walking, and slowly increasing the distance each day, is the best exercise after this type of surgery. Some discomfort is normal, but pain is a signal to slow down and rest.

Signs of infection like swelling, redness or draining at the incision site, and fever should be checked out by the surgeon immediately. Keep in mind, the amount of time it takes to return to normal activities is different for every patient. Discomfort should decrease a little each day. Most patients will benefit from a postoperative exercise program or supervised physical therapy after surgery. You should ask your doctor about exercises to help with recovery.

The expected outcome from decompressive/fusion procedures of the neck is good. Surgery is very effective in reducing the pain in the arms and shoulders caused by nerve compression. However, some neck pain may persist.

The outcome of decompression treatment for spinal cord impingement is more variable. Decompressive procedures such as corpectomy generally arrest progression of the disorder. The amount of recovery of neurologic function such as balance, coordination, bowel or bladder incontinence depends on the amount and duration of compression, as well as the presence of any permanent damage to the spinal cord.