What is carotid artery disease?

To better understand how carotid artery disease affects the brain, a basic review of the anatomy of the circulation system of the brain follows. 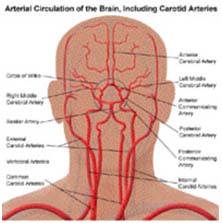 What are the carotid arteries?


Why are the carotid arteries important?

Because the carotid arteries deliver blood to the brain, carotid artery disease can have serious implications by reducing the flow of oxygen and nutrients to the brain. The brain needs a constant supply of oxygen and nutrients in order to function. Even a brief interruption in blood supply can cause problems. Brain cells begin to die after just a few minutes without blood or oxygen. If the narrowing of the carotid arteries becomes severe enough to block blood flow, or a piece of atherosclerotic plaque breaks off and obstructs blood flow to the brain, a stroke may occur.

Atherosclerosis is the most common cause of carotid artery disease. It is unknown exactly how atherosclerosis begins or what causes it. Atherosclerosis is a slow, progressive, vascular disease that may start as early as childhood. However, the disease has the potential to progress rapidly. It is generally characterized by the accumulation of fatty deposits along the innermost layer of the arteries. If the disease process progresses, plaque formation may take place. Plaque is made up of deposits of smooth muscle cells, fatty substances, cholesterol, calcium, and cellular waste products. This thickening narrows the arteries and can decrease blood flow or completely block the flow of blood to the brain.


What are the risk factors for carotid artery disease?

Atherosclerosis is thought to play an important role in the development of carotid artery disease. Risk factors associated with atherosclerosis include :

A risk factor is anything that may increase a person's chance of developing a disease. It may be an activity, such as smoking, diet, family history, or many other things. Different diseases have different risk factors.

Although these risk factors increase a person's risk, they do not necessarily cause the disease. Some people with one or more risk factors never develop the disease, while others develop disease and have no known risk factors. Knowing your risk factors to any disease can help to guide you into the appropriate actions, including changing behaviors and being clinically monitored for the disease.


What are the symptoms of carotid artery disease?

A transient ischemic attack (TIA) is a sudden or a temporary loss of blood flow to an area of the brain, usually lasting less than five minutes but not longer than 24 hours, with complete recovery.

Symptoms of a TIA may include, but are not limited to, the following :

TIA may be related to severe narrowing or blockage or from small pieces of an atherosclerotic plaque breaking off, traveling through the bloodstream, and lodging in small blood vessels in the brain. With TIA, there is rarely permanent brain damage.

Call for medical help immediately if you suspect a person is having a TIA, as it may be a warning sign that a stroke is about to occur. Not all strokes, however, are preceded by TIAs.


Stroke is another indicator of carotid artery disease. The symptoms of a stroke are the same as for a TIA. A stroke is loss of blood flow (ischemia) to the brain that continues long enough to cause permanent brain damage. Brain cells begin to die after just a few minutes without blood or oxygen. The area of dead cells in tissues is called an infarct.


The area of the brain that suffered the loss of blood flow will determine what the physical or mental disability may be. This may include impaired ability with movement, speech, thinking and memory, bowel and bladder function, eating, emotional control, and other vital body functions. Recovery from the specific ability affected depends on the size and location of the stroke. A minor stroke may result in only minor problems such as weakness in an arm or leg. More severe strokes may cause paralysis, loss of speech, or even death.


The symptoms of carotid artery disease may resemble other medical conditions or problems. Always consult your physician for a diagnosis.


How is carotid artery disease diagnosed?

In addition to a complete medical history and physical examination, diagnostic procedures for carotid artery disease may include any, or a combination, of the following :

Specific treatment for carotid artery disease will be determined by your physician based on :

Medical treatment for carotid artery disease may include :

Medications that may be used to treat carotid artery disease include : 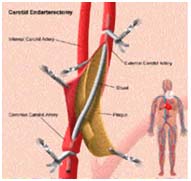 In persons with narrowing of the carotid artery greater than 50 percent to 69 percent, a more aggressive treatment may be recommended, particularly in persons with symptoms. Surgical treatment decreases the risk for stroke after symptoms such as TIA or minor stroke, especially in persons with an occlusion (blockage) of more than 70 percent who are good candidates for surgery. 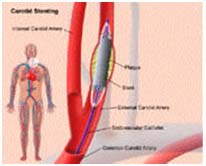