Orthopedic Surgery
soft tissue release to allow anterior and superior displacement of the head to facilitate accurate reaming of the acetabulum. This allows precise implantation of the definitive acetabular component in its true anteverted and closed position.

Resurfacing a hip is similar to a total hip replacement from a surgical perspective. Instead of resecting the arthritic femoral head, the head is reshaped and resurfaced with a metal mushroom-like cap. This is cemented in place. The socket is prepared in a similar fashion to a total hip replacement. The socket is press-fitted into the acetabular bone and bone grows into the socket. 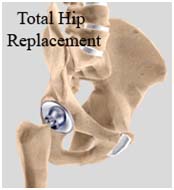 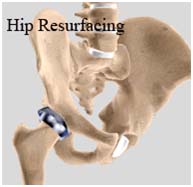 The advantages of hip resurfacing replacement include reduced dislocation, restores leg lengths, restores “normal anatomy” and the hip appears to be more durable allowing one to perform higher impact activity. The metal on metal technology has been present for the past 30 years and has proved successful.

Instruments have been designed that allow for smaller incision surgery. This is reflected in less tissue damage and slightly quicker recovery rates. The wounds are also a little smaller. It must be pointed out, however, that six months following the surgery there is no difference in the outcome between a standard incision hip and a mini incision hip.

Navigation is the latest technology that allows more accurate placement of the components to re-establish the normal hip biomechanics. This new technology is still evolving.