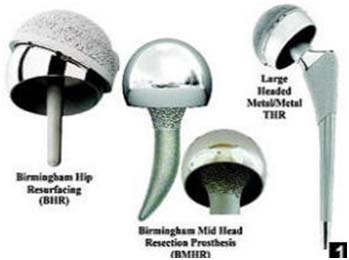 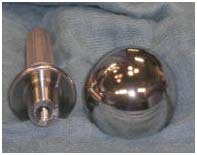 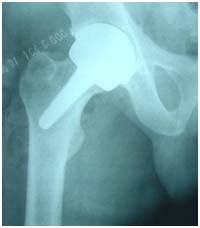 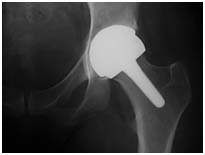 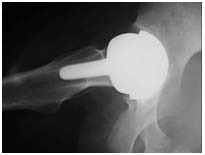 The BMHR has specifically been designed for patients who have weaker bone in the head of the femur. In the BMHR more of the weak bone is resected and is replaced with metal. This will dramatically increase the range of patients who can have this surgery.X-ray wise it looks almost like the BHR but the amount of bone removed is more. Thus the risk of fracture in post-op is reduced or eliminated for borderline patients.

Large cysts of the femoral head

Reduction of bone substance due to arthroses

Marked bone involution through inactivity but with regression potential

fig: X-Ray of BMHR in place

Resurfacing is only advisable when the stability of the bone and the shape of the femoral head offer sufficient support for the prosthesis. With healthy and active patients who do not meet these requirements but who can benefit from a bone conserving process, the Mid Head Resection can be an alternative to a standard prosthesis.

With this prosthesis, the fixation of the femoral component depends less on the bone of the femoral head but more on the stability of a titanium stem with bone ingrowth in the femoral neck.

Those parts of the femoral head which have been destroyed by cysts, circulatory disorders, malformations or involution due to arthrosis are removed. A titanium stem adjusted to size is implanted into the healthy part of the femoral head and neck, which is fixed by bone ingrowth (combines with the bone) and strengthens the femoral neck. In this way the implant-bone compound can withstand bending and torque forces.

Through the use of this implant, an opening of the femoral medullary cavity can often be avoided by implanting a prosthesis stem. The advantage of resurfacing is retained


What is the BMHR and Why do we need it?

For patients with osteonecrosis involving a larger volume of the femoral head, an uncemented short-stemmed prosthesis, the