Orthopedic Surgery
However, with the conventional hip replacement there are reservations about this procedure in relatively younger people because of the amount of bones to be scarified and need for reversion surgery later on.

This can also be done in relatively older patients (up to 65 years) if bone stock is good and there are no other contraindications to Surface Arthroplasty of Hip.

Certain criteria must be met for suitability of Surface Arthroplasty such as BHR / ASR.

Combination of two or more of following would make Surface Arthroplasty unsuitable :


The outstanding problem in conventional Hip Replacement is the young active patient with an arthritic hip. The problem is worse if the patient is male (higher loosening rates with THR), has an active job and wishes to play sport or engage in physical activity to keep himself healthy.


What is Hip Resurfacing?

It is a bone-conserving alternative to the conventional total hip replacement surgery (THR).

Hip resurfacing is anatomically and biomechanically similar to the natural hip joint resulting in increased stability, flexibility and range of motion.

Hip resurfacing is an approach to treat the following illnesses of the hip :

The leading cause of hip pain is osteoarthritis, also commonly known as 'wear and tear' arthritis. OA wears away the smooth cartilage lining of the bip's ball-and-socket joint causing hip joint pain or groin pain while walking or running.


2. Developmental Dysplasia of the Hip

Developmental dysplasia o the hip (DDH), also called hip dysplasia, is a lifelong condition. DDH sufferers are born with altered hip anatomy which leads to arthritis at an early age. In infants with DDH, a brace or harness is used to hold the hip joints in place during early growth. If bracing fails or the child is diagnosed later, surgical reconstruction may be needed.

Avascular necrosis of the hip or hip osteonecrosis is a disease prevalent in middle-aged people which results when reduced blood circulation starves the bones that form the hip joint. In time, the starved bone dies, and the hip joint can collapse.

Inflammatory arthritis (rheumatoid arthritis) is a chronic joint disease that usually develops in middle age, but may occur in younger patients. It causes swelling of the hip joints, hip pain and joint stiffness, and may cause a loss of motion.


Who is a candidate for hip resurfacing?

Typically, physically active patients, under 65 years of age, who suffer from hip diseases listed above are candidates for BHR. Patients older than 65 years can also benefit from BHR if their bone quality is strong enough to support the implant. You must discuss your suitability for hip resurfacing with an orthopedic surgeon. 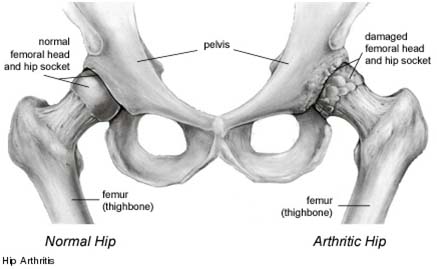 Total Hip Replacement has been a revolutionary surgery in orthopedics. Millions of people, attained pain free mobilization following this surgery.