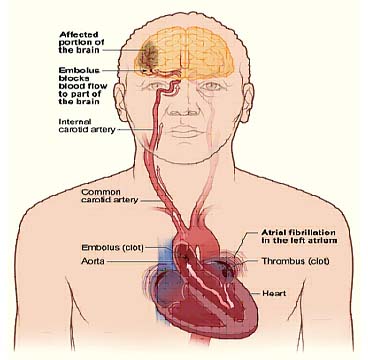 A stroke occurs when the blood supply to part of the brain is suddenly interrupted or when a blood vessel in the brain bursts, spilling blood into the spaces surrounding brain cells. Within a few minutes, brain cells begin to die.A stroke is a medical emergency.

The most common type of stroke is a blockage. This is called an ischaemic stroke, which happens when a clot blocks an artery that carries blood to the brain. It may be caused by : 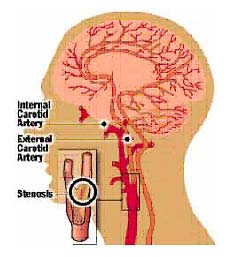 The second type of stroke is a bleed, when a blood vessel bursts, causing bleeding (haemorrhage) into the brain. This is called a haemorrhagic stroke. It may be caused by :

Stroke is diagnosed through several techniques: a neurological examination, CT scans (most often without contrast enhancements) or MRI scans, Doppler ultrasound, and arteriography. The diagnosis of stroke itself is clinical, with assistance from the imaging techniques. Imaging techniques also assist in determining the subtypes and cause of stroke.

CT or CAT scan) — Uses X-rays to generate an image of the brain. Doctors use CT to determine whether a stroke has occurred and, if so, what kind.

MRI can give very accurate images of the brain. These are used to determine the presence, location and size of aneurysms and arteriovenous malformations, which are potential sources for hemorrhagic stroke

An EEG can provide valuable information about underlying problems in the brain. Some people who have strokes are prone to seizures, and this test will help doctors determine if seizures are present and if treatment with medications is needed.

Thrombolytic (Fibrinolytic) Drugs: In certain circumstances, a drug called tissue plasminogen activator (tPA) is given intravenously to break up clots and help restore blood flow to the brain. This medication carries a risk for increased intracranial hemorrhage and is not used for hemorrhagic stroke.