Epilepsy is a brain disorder in which a person has recurrent seizures. A seizure is caused by a sudden burst of excess electrical activity in the brain, causing a temporary disruption in the normal message passing between brain cells. This disruption results in the brain’s messages becoming halted or mixed up.

Some seizures are idiopathic, which means the cause can not be identified. Such seizures usually begin between ages 5 and 20, but they can occur at any age. People with this condition have no other neurological problems, but often have a family history of seizures or epilepsy.

Some of the things that can make a person more likely to develop epilepsy :

An electroencephalograph (EEG), a reading of the electrical activity in the brain, may confirm the presence of various types of seizures. It may, in some cases, indicate the location of the lesion causing the seizure. EEGs can often be normal in between seizures, so it may be necessary to do prolonged EEG monitoring.


Classification And Types of Epilepsy

A simple classification of epilepsy is : 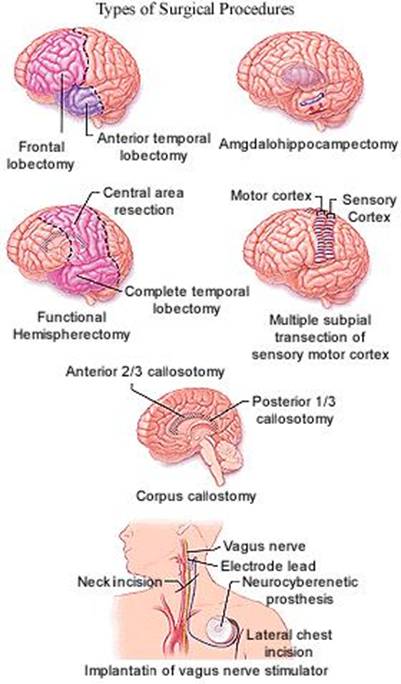 The common treatments for Neurosurgery are as follows :