The thyroid gland is located in the front section of the neck. The gland captures iodine that has been absorbed into the blood from food and uses the iodine to produce thyroid hormones. Thyroid hormones play a major role in regulating the body’s metabolism, the body’s process of using food for energy and growth.

Thyroidectomies are usually successful, and recovery time is generally rapid. In rare cases, significant complications may follow the procedure. The American Thyroid Association says the risk of such outcomes is significantly reduced when experienced surgeons perform the thyroidectomy.

Thyroid surgery is performed in a number of circumstances : 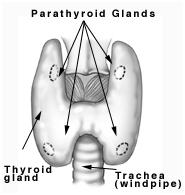 There are three main types of thyroid surgery :


Total Thyroidectomy - Complete Removal of the Thyroid :- This is the most common type of thyroid surgery, and is often used for thyroid cancer, and in particular, aggressive cancers, such as medullary or anaplastic thyroid cancer. It is also used for goiter and Graves'/hyperthyroidism treatment.


Subtotal/Partial Thyroidectomy - Removal of Half of the Thyroid Gland:- For this operation, cancer must be small and non-aggressive follicular or papillary and contained to one side of the gland. When a subtotal or partial thyroidectomy is performed, typically, surgeons perform a bilateral subtotal thyroidectomy which leaves from 1 to 5 grams on each side/lobe of the thyroid. A Harley Dunhill procedure is also popular, in which there's a total lobectomy on one side, and a subtotal on the other, leaving 4 to 5 grams of thyroid tissue remaining.


Thyroid Lobectomy - Removal of Only About a Quarter of the Gland:- This is less commonly used for thyroid cancer, as the cancerous cells must be small and non-aggressive.


What You Are Likely to Experience

In most cases, surgery of the thyroid is not highly complicated, and usually takes no more than two hours.

Removal of half of the thyroid takes 45 minutes to an hour, so if the entire gland is being removed, the surgery will last about an hour and a half.

Check with your surgeon about medications you are taking, and what you should/shouldn't take in the days prior to surgery.

You will most likely be asked to check into the hospital the morning of your surgery. Typically, your surgeon will ask that you refrain from eating or drinking after midnight the night before surgery.

The benefits of local anesthesia are that it is associated with a shorter hospital stay, shorter actual surgery time, and less vomiting and nausea after surgery.

If you choose local anesthesia, your doctor will typically give you numbing medication for the thyroid area, plus a mild sedative to help you stay calm. You will, however, be awake during the surgery, and able to interact with your surgeon.

Both types of thyroidectomy are usually done under general anesthesia. However, if general anesthesia is too risky for a patient, local or regional anesthesia may be used to permit the patient to remain awake during the procedure. An intravenous (IV) line will be inserted into one of your veins to deliver fluids and medications.

In a conventional thyroidectomy, a 3- to 4-inch incision will be made through the skin in the low collar area of your neck (the lower front portion of your neck, above the collarbones and breast bone). Next, a vertical cut will be made through the strap-like muscles located just below the skin, and these muscles will be spread aside to reveal the thyroid gland and other deeper structures. Then, all or part of your thyroid gland will be cut free from surrounding tissues and removed. During the entire procedure, the surgeon will be very careful to preserve your parathyroid glands (two pairs of small glands located near the thyroid) and to avoid damaging important nerves and blood vessels in your neck. After your thyroid gland is removed, one or two stitches will be used to bring your neck muscles together again. Then the deeper layer of your incision will be closed with stitches, and your skin will be closed with sterile paper tapes. A small suction catheter (tube) will be inserted near the area of your incision to drain any blood accumulated inside your neck. Following surgery, you will be taken to a recovery room, where you will be monitored for several hours until you are stable enough to return to your hospital room. After about 24 hours, the suction catheter will be removed from your neck. Most patients go home one or two days after the surgery.

A viewing instrument called an endoscope and small surgical instruments will be inserted into your neck through three or four small incisions. Each incision is about 3 millimeters to 5 millimeters long (less than ? inch). Then the surgeon will use a tiny camera on the endoscope to guide the instruments and remove your thyroid tissue. At the end of the procedure, your neck incisions will be closed with tiny stitches or surgical tape.

In the surgery, the surgeon will cut a 3- to 5-inch incision across the base of your neck in front. The skin and muscle are pulled back to expose the thyroid gland. The incision is usually made so that it falls in the fold of the skin in your neck, making it less noticeable.

Blood supply to the gland is "tied off," and the parathyroid glands are identified (so that they can be protected). The surgeon then separates the trachea from the thyroid, and removes all or part of the gland.

A newer technique, known as endoscopic thyroid surgery, involves using a small magnifying camera inserted in the neck. Carbon dioxide gas is pumped into the neck area to help make it easier to see and work on the gland. A second small incision is made, and a thin tube with a scalpel-like edge is inserted through that incision. This tube is the surgical tool that is used to remove the thyroid. Endoscopic surgery, because it involves two small scars of less than one inch, usually leaves less visible scarring, and allows a quicker return to normal activity. Sometimes, the entry point is under the arm -- known as axillary surgery.

Endoscopic surgery is not common, however, and you'll need to investigate to find a surgeon with experience doing these surgeries.

Most surgeons use dissolvable stitches, but you may want to ask your surgeon ahead of time which kind he plans to use, because the non-absorbable stitches actually tend to cause less scarring. If you have any history of allergic skin reactions to past stitches, you may also want to ask your doctor about using hypoallergenic suture material.

After the surgery, you will usually remain under observation at the hospital for at least 6 hours. If you are having outpatient surgery, you may be discharged after that point.

Before you are discharged, your incision is usually covered with a clear protective waterproof glue called colloidium. (This allows you to bathe or shower after the surgery.)

Rarely, if there is concern about bleeding or if the thyroid is very large and the surgery has left a large open space, a drain will be left in your wound to prevent fluid from accumulating. You'll need to return to the surgeon a few days later to have the drain removed.

Thyroid surgery is generally considered extremely safe. There are some common short-term side effects after thyroid surgery such as pain when swallowing, and neck stiffness. Most patients also become hypothyroid after surgery and require thyroid hormone replacement therapy.

While complications are not common, a few can result from thyroid surgery. These include hypoparathyroidism and hypocalcemia, and laryngeal nerve damage. Signs can include numbness and tingling around your lips, hands, and the bottom of your feet, muscle cramps and spasms, bad headaches, anxiety, depression, hoarseness, and difficulty speaking loudly.

Thyroidectomy is generally a safe surgical procedure. However, some people have major or minor complications.


Hemorrhage (bleeding) beneath the neck wound ?

If this occurs, the wound bulges and the neck swells, possibly compressing structures inside the neck and interfering with breathing. This is an emergency.

If a thyroidectomy is done to treat a very overactive gland (thyrotoxicosis), there may be a surge of thyroid hormones into the blood. This is a very rare complication because medications are given before surgery to prevent this problem.


Injury to the recurrent laryngeal nerve ?

Because this nerve supplies the vocal cords, injury can lead to vocal cord paralysis and can produce a husky voice, either short term or long term. In rare cases, if both vocal cords are paralyzed, the opening of the throat may be obstructed, causing breathing problems.


Injury to a portion of the superior laryngeal nerve ?

If this occurs, patients who sing may not be able to hit high notes, and the voice may lose some projection.

If the parathyroid glands are mistakenly removed or unintentionally damaged during a thyroidectomy, the patient may suffer from hypoparathyroidism, a condition in which the levels of parathyroid hormone (a hormone that helps regulate body calcium) are abnormally low.