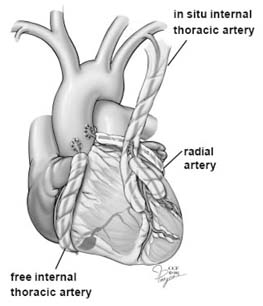 CABG is a heart surgery procedure in which one or more blocked coronary arteries are bypassed by a blood vessel graft to restore normal blood flow to the heart. These grafts usually come from the patient’s own arteries and veins located in the chest (thoracic), leg (saphenous) or arm (radial). The graft goes around the blocked artery (or arteries) to create new pathways for oxygen-rich blood to flow to the heart.

The goals of the procedure are to relieve symptoms of coronary artery disease (including angina), enable the patient to resume a normal lifestyle and to lower the risk of a heart attack or other heart problems.

The American Heart Association reports that 467,000 cases of coronary artery bypass surgery were performed on 268,000 patients in the United States in 2003.


Who is eligible to receive coronary artery bypass graft surgery?

The decision to prescribe medical treatment, invasive procedures or cardiac bypass surgery depends on several factors including the extent of cardiovascular disease, the severity of symptoms, your age and other medical conditions. The cardiologist (heart specialist) and surgeon will determine the best method of therapy for each patient.


What happens during the cardiac bypass surgery?

The surgery generally lasts from three to five hours, depending on the number of arteries being bypassed. After general anesthesia is administered, the surgeon removes the veins or prepares the arteries for grafting. 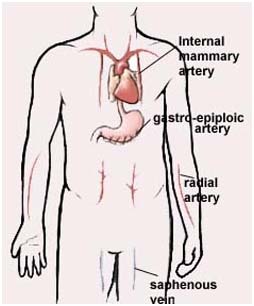 There are several types of bypass grafts that can be used in cardiac bypass surgery. The surgeon decides which graft(s) to use, depending on the location of the blockage, the amount of the blockage and the size of the patient’s coronary arteries.

Before the patient leaves the hospital, the doctor or nurse will explain the specific bypass procedure that was performed.

During surgery, the heart-lung bypass machine (called “on-pump” surgery) is used to take over for the heart and lungs, allowing the circulation of blood throughout the rest of the body. The heart’s beating is stopped so the surgeon can perform the bypass procedure on a “still” heart. 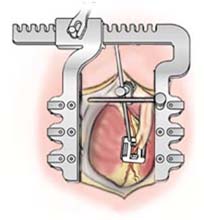 Off-pump or beating heart bypass surgery allows surgeons to perform surgery on the heart while it is still beating. The heart-lung machine is not used. The surgeon uses advanced operating equipment to stabilize (hold) portions of the heart and bypass the blocked artery in a highly controlled operative environment. Meanwhile, the rest of the heart keeps pumping and circulating blood to the body.

In contrast, traditional CABG surgery requires a 6- to 8-inch incision down the center of the sternum (breastbone) to provide the surgeon direct access to the heart. The benefits of minimally invasive bypass surgery include a smaller incision (and a smaller scar), reduced risk of infection, decreased recovery time and shorter hospital stay. 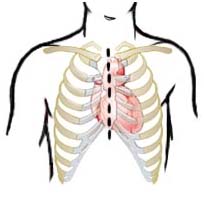 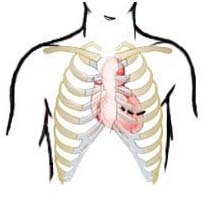 After the grafts have been completed during the “on pump” procedure, the heart-lung machine is turned off, the heart starts beating on its own, and the flow of blood returns to normal. Temporary pacing wires and a chest tube to drain fluid are placed before the sternum is closed with special sternal wires. Then the chest is closed with internal stitches or traditional external stitches. Sometimes a temporary pacemaker is attached to the pacing wires to regulate the heart rhythm until your condition improves.

The patient is transferred to an intensive care unit for close monitoring for about one to two days after the surgery. The monitoring during recovery includes continuous heart, blood pressure and oxygen monitoring and frequent checks of vital signs and other parameters, such as heart sounds.

Once the patient is transferred to the nursing unit, the hospital stay is about 3 to 5 more days.

Full recovery from coronary artery bypass graft surgery takes around two months. Most patients are able to drive in about three to eight weeks after surgery. Your doctor will provide specific guidelines for your recovery and return to work, including specific instructions on activity and how to care for your incision and general health after the surgery.