What is Pancreatic Cancer?


What is Pancreatic Cancer?

Pancreatic cancer is one of the most serious of cancers. It develops when cancerous cells form in the tissues of your pancreas — a large organ that lies horizontally behind the lower part of your stomach. Your pancreas secretes enzymes that aid digestion and hormones that help regulate the metabolism of carbohydrates. 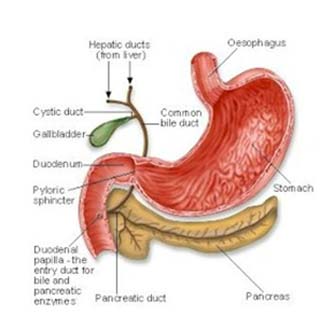 Pancreatic cancer spreads rapidly and is seldom detected in its early stages, which is a major reason why it's a leading cause of cancer death. Signs and symptoms may not appear until the disease is quite advanced. By that time, the cancer is likely to have spread to other parts of the body and surgical removal is no longer possible.

For years, little was known about pancreatic cancer. But researchers are beginning to understand the genetic basis of the disease — knowledge that may eventually lead to new and better treatments. Just as important, you may be able to reduce your risk of pancreatic cancer with some lifestyle changes. 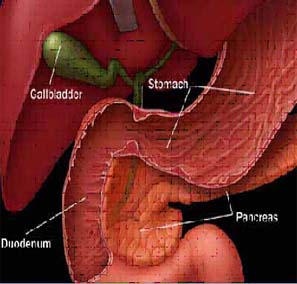 We still do not know exactly what causes most cases of pancreatic cancer. Several risk factors have been linked to the disease. A risk factor is something that affects a person's chance of getting a disease such as cancer. Some risk factors, such as smoking, can be controlled. Others, like a person's age or race, can't be changed. But keep in mind that having one or more risk factors does not mean that a person will get the disease.

Age : The risk of this cancer goes up with age. Almost 90% of patients are older than 55. The average age at the time the cancer is found is 72.

Gender : Men have this cancer slightly more often than women.

Race : African Americans are more likely to have this cancer than are whites.

Obesity and Lack of Exercise : Very overweight people are more likely to develop pancreatic cancer, as are those who don't get much exercise.

Diabetes : Pancreatic cancer is more common in people with this disease.

Chronic Pancreatitis : This is a long-term inflammation of the pancreas. It is linked with a slightly higher risk of pancreatic cancer, but most people with this condition do not get pancreatic cancer.

Work Exposure : Heavy exposure at work to certain substances (pesticides, dyes, and chemicals) may increase the risk of getting cancer of the pancreas.

Family History : Cancer of the pancreas seems to run in some families. This may account for about 1 in 10 cases. Changes in DNA that increase the risk for certain other cancers also increase the risk of this cancer.

Stomach Problems : Having too much stomach acid or having a bacteria called H. pylori in the stomach may increase the risk of pancreatic cancer.

Smoking : The risk of getting cancer of the pancreas is 2 to 3 times higher among smokers. About 3 out of 10 cases of pancreatic cancer are thought to be caused by smoking.


Signs and Symptoms of Pancreatic Cancer

Pancreatic cancer often is called a "silent" disease because it typically doesn't cause symptoms early on. The cancer may grow and spread for some time before symptoms develop, which may be so vague that they are initially ignored. For these reasons, pancreatic cancer is hard to detect early. In many cases, the cancer has spread outside the pancreas by the time it is found. When symptoms appear, their type and severity depend on the location and size of the tumor.

Common symptoms of Pancreatic Cancer may include:

Unfortunately, there are no laboratory tests available for the early detection or diagnosis of pancreatic cancer. Diagnosis is usually made after the cancer has already spread, using imaging tests and biopsy.

Some diagnostic and imaging tests that may be used include:

Treatment for Pancreatic Cancer in India

The Whipple procedure (pancreatoduodenectomy) is the most common operation performed for pancreatic cancer and may be used to treat other cancers such as small bowel cancer. Surgeons remove the head of the pancreas, most of the duodenum (a part of the small intestine), a portion of the bile duct and sometimes a portion of the stomach. After the pancreatoduodenectomy, the surgeon reconstructs the digestive tract. Patients leave the hospital in an average of 14 days. 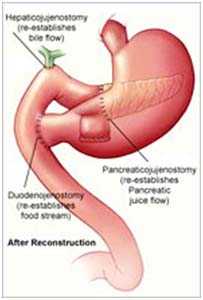 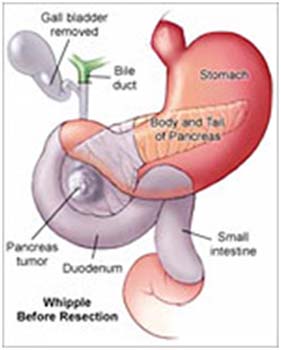 This illustration depicts pancreatic tumor in the body of the pancreas. 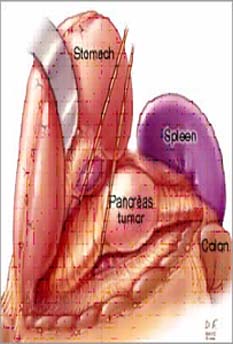 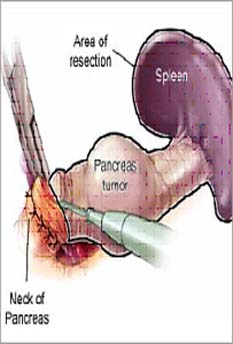 This procedure is performed infrequently today because lifelong adverse effects may result. In this surgery, surgeons remove the entire pancreas, bile duct, gallbladder, and spleen, and possibly portions of the small intestine, stomach and nearby lymph.

Most physicians consider pancreatic cancer inoperable if the tumor is attached to the portal vein. We Care India partner hospital is one of few medical facilities in India that offers removal and reconstruction of the entire portal vein. The capability to perform this procedure permits a larger percentage of patients who have pancreatic cancer to have a potentially curative operation.