What is the Larynx?

The larynx is an organ at the front of your neck. It is also called the voice box. It is about 2 inches long and 2 inches wide. It is above the windpipe (trachea). Below and behind the larynx is the esophagus.

The larynx has two bands of muscle that form the vocal cords. The cartilage at the front of the larynx is sometimes called the Adam's apple.

The larynx has three main parts: 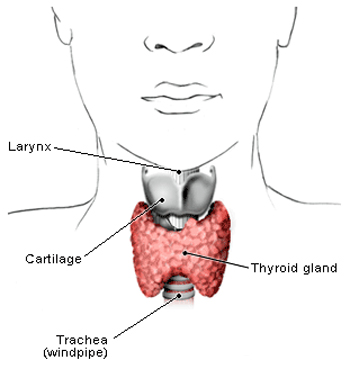 
Who's at risk for larynx cancer?

No one knows the exact causes of cancer of the larynx. Doctors cannot explain why one person gets this disease and another does not. We do know that cancer is not contagious. You cannot "catch" cancer from another person.

People with certain risk factors are more likely to get cancer of the larynx. A risk factor is anything that increases your chance of developing this disease.

Other studies suggest that having certain viruses or a diet low in vitamin A may increase the chance of getting cancer of the larynx. Another risk factor is having gastroesophageal reflux disease (GERD), which causes stomach acid to flow up into the esophagus.

The symptoms of cancer of the larynx depend mainly on the size of the tumor and where it is in the larynx. Symptoms may include the following: These symptoms may be caused by cancer or by other, less serious problems. Only a doctor can tell for sure.

If you have symptoms of cancer of the larynx, the doctor may do some or all of the following exams:

Physical exam The doctor will feel your neck and check your thyroid, larynx, and lymph nodes for abnormal lumps or swelling. To see your throat, the doctor may press down on your tongue.

Indirect laryngoscopy The doctor looks down your throat using a small, long-handled mirror to check for abnormal areas and to see if your vocal cords move as they should. This test does not hurt. The doctor may spray a local anesthesia in your throat to keep you from gagging. This exam is done in the doctor's office.

Direct laryngoscopy The doctor inserts a thin, lighted tube called a laryngoscope through your nose or mouth. As the tube goes down your throat, the doctor can look at areas that cannot be seen with a mirror. A local anesthetic eases discomfort and prevents gagging. You may also receive a mild sedative to help you relax. Sometimes the doctor uses general anesthesia to put a person to sleep. This exam may be done in a doctor's office, an outpatient clinic, or a hospital.

CT scan An x-ray machine linked to a computer takes a series of detailed pictures of the neck area. You may receive an injection of a special dye so your larynx shows up clearly in the pictures. From the CT scan, the doctor may see tumors in your larynx or elsewhere in your neck.

Biopsy If an exam shows an abnormal area, the doctor may remove a small sample of tissue. Removing tissue to look for cancer cells is called a biopsy. For a biopsy, you receive local or general anesthesia, and the doctor removes tissue samples through a laryngoscope. A pathologist then looks at the tissue under a microscope to check for cancer cells. A biopsy is the only sure way to know if a tumor is cancerous.

People with cancer of the larynx often want to take an active part in making decisions about their medical care. It is natural to want to learn all you can about your disease and treatment choices. However, shock and stress after a diagnosis of cancer can make it hard to remember what you want to ask the doctor. Here are some ideas that might help: Your doctor may refer you to a specialist who treats cancer of the larynx, such as a surgeon, otolaryngologist (an ear, nose, and throat doctor), radiation oncologist, or medical oncologist. You can also ask your doctor for a referral. Treatment usually begins within a few weeks of the diagnosis. Usually, there is time to talk to your doctor about treatment choices, get a second opinion, and learn more about the disease before making a treatment decision.

The doctor can describe your treatment choices and the results you can expect for each treatment option. You will want to consider how treatment may change the way you look, breathe, and talk. You and your doctor can work together to develop a treatment plan that meets your needs and personal values.

The choice of treatment depends on a number of factors, including your general health, where in the larynx the cancer began, the size of the tumor, and whether the cancer has spread.

Cancer of the larynx may be treated with radiation therapy, surgery, or chemotherapy. Some patients have a combination of therapies.

Radiation therapy (also called radiotherapy) uses high-energy x-rays to kill cancer cells. The rays are aimed at the tumor and the tissue around it. Radiation therapy is local therapy. It affects cells only in the treated area. Treatments are usually given 5 days a week for 5 to 8 weeks.

Laryngeal cancer may be treated with radiation therapy alone or in combination with surgery or chemotherapy:


After radiation therapy, some people need feeding tubes placed into the abdomen. The feeding tube is usually temporary.

Surgery is an operation in which a doctor removes the cancer using a scalpel or laser while the patient is asleep. When patients need surgery, the type of operation depends mainly on the size and exact location of the tumor.

There are several types of laryngectomy (surgery to remove part or all of the larynx):

During surgery for cancer of the larynx, the surgeon may need to make a stoma. (This surgery is called a tracheostomy.) The stoma is a new airway through an opening in the front of the neck. Air enters and leaves the windpipe (trachea) and lungs through this opening. A tracheostomy tube, also called a trach ("trake") tube, keeps the new airway open. For many patients, the stoma is temporary. It is needed only until the patient recovers from surgery. More information about stomas can be found in the "Living with a Stoma" section.

After surgery, some people may need a temporary feeding tube.

This picture shows the pathways for air and food after a total laryngectomy.

The stoma is the new opening into the trachea.

Chemotherapy is the use of drugs to kill cancer cells. Your doctor may suggest one drug or a combination of drugs. The drugs for cancer of the larynx are usually given by injection into the bloodstream. The drugs enter the bloodstream and travel throughout the body.

Chemotherapy is used to treat laryngeal cancer in several ways:

Chemotherapy may be given in an outpatient part of the hospital, at the doctor's office, or at home. Rarely, a hospital stay may be needed.