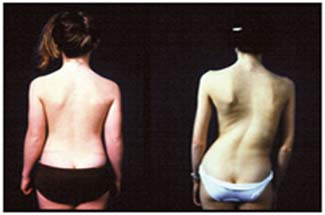 Some degree of scoliosis may occur in severe osteoarthritis patient. It is a spinal curvature as seen from the front or back of the person who has it. Instead of being straight shape, spine assume an‘s’ or ‘c’ shape. The curves are measured in degrees. Curve which is more than 30 degree need to be carefully watched because they can worsen rapidly. Scoliosis more often then seen with osteoarthritis person as compared to general population. 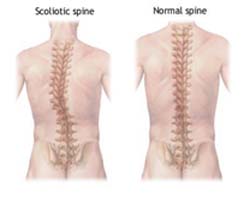 Scoliosis is an abnormal side to side curvature of the spine. A normal spine will have curves that run from front to back. When viewed from the back, a normal spine will appear perfectly straight. When viewed from the back, a spine with scoliosis will appear to curve to one side, or both. This condition can also cause the rotation of individual vertebra in the spine.

When the spine is structuring normal but it appears curved because of another cause is called as functional scoliosis. Such type of scoliosis is often caused by underlying condition such as 1) If there is difference in length of leg 2) Muscle spasms or 3) Inflammatory condition such as appendicitis

The spine curvature is abnormal in structural scoliosis. It may be due to unknown factors Birth defects, Injury, Certain Infections, Tumors, Rheumatic disease, Neuromuscular disease(such as polio, muscular dystrophy and cerebral palsy) or Connective tissue disorders

The spine curvature is abnormal in structural scoliosis. It may be due to unknown factors Birth defects, Injury, Certain Infections, Tumors, Rheumatic disease, Neuromuscular disease(such as polio, muscular dystrophy and cerebral palsy) or Connective tissue disorders

Scoliosis is usually painless. Scoliosis usually doesn't cause pain or limit a child's movements, so it is easily overlooked. Most children receive a diagnosis during a routine physical.

An X ray of the back will show exactly where and how much the spine is curved. The doctor can make very precise calculations from the X-ray photograph to determine a measurement known as the Cobb angle. The Cobb angle combines all of the data provided by an X-ray photograph to determine the extent of a person's scoliosis. Occasionally, magnetic resonance imaging (MRI) would be done.

The non-operative treatment of scoliosis involves observing the deformity with examinations and repeated x-rays. Under certain Circumstances, when spinal growth remains, a brace may be used in combination with follow-up x-rays. Physical therapy exercises have not been shown to be effective treatment for scoliosis.

The most common surgical treatment for scoliosis is a Spine Fusion using special stainless steel rods, hooks, and a bone graft. The rods are attached to the spine with hooks and the curved portion of the spine is carefully straightened. Then, small strips of bone graft are placed over the spine to fuse it in a straight position.

As the bone graft heals over the next several months, the spine becomes solid and will not curve again. But the part of the spine that has not been fused will still be flexible, and allow nearly normal overall movement.