A normal spine, when viewed from behind appears straight. However, a spine affected by kyphosis shows evidence of a forward curvature of the back bones (vertebrae) in the upper back area, giving the child a "humpback" appearance. 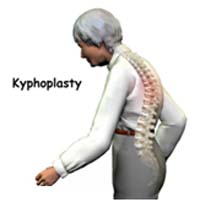 The Scoliosis Research Society defines kyphosis as a curvature of the spine measuring 45 degrees or greater on an x-ray (a diagnostic test which uses invisible electromagnetic energy beams to produce images of internal tissues, bones, and organs onto film). The normal spine has only 20 to 45 degrees of curvature in the upper back area. Kyphosis is a type of spinal deformity and should not be confused with poor posture.

Kyphosis is a forward rounding of your upper back (thoracic spine). Some rounding is normal, but the term "kyphosis" usually refers to an exaggerated rounding, more than 40 to 45 degrees. This deformity is also called round back or hunchback.

The thoracic spine consists of the middle 12 vertebrae, which connect to your ribs. With kyphosis, your spine may look normal or you may develop a hump.

Kyphosis is a spinal deformity that can result from trauma, developmental problems, or degenerative disease. Kyphosis can occur at any age, although it is rare at birth.

In adults, kyphosis can be a result of osteoporotic compression fractures (fractures caused by osteoporosis), degenerative disease (such as arthritis), or spondylolisthesis (slipping of one vertebra forward on another).

Some of the most commonly found symptoms of Kyphosis include Persistent mild pain in back, Stiffness and tenderness of spine, Fatigue, Breathing disorders such as difficulty in breathing, Round back appearance, Hunchback, roundback or slouching posture, Difference in shoulder height, Slouching posture or hunchback.

Physical examination by a health care provider confirms the abnormal curvature of the spine. The doctor will also look for any neurological changes (weakness, paralysis, or changes in sensation) below the level of the curve.

A spine x-ray will be done to document the severity of the curve and allow serial measurements to be performed. Occasionally, pulmonary function tests may be used to assess whether the kyphosis is affecting breathing. If there is any question of a tumor, infection, or neurological symptoms, then an MRI may be ordered.

Painkillers and calcium supplements are usually helpful in older patients with osteoporosis. Infection of the spine requires rest in bed and treatment with antibiotics. This may be continued for up to 6 weeks. When surgery is not needed, patients are normally seen about every 6 months. Seek advice if there is any sudden change in the curve, or if there is pain. 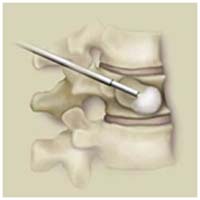 Kyphoplasty is a new, Minimally Invasive procedure for the treatment of compression fractures of the spine, usually due to osteoporosis. A compression fracture occurs when vertebrae (back bones), weakened by osteoporosis, collapse and become wedge shaped instead of rectangular. A person with multiple compression fractures might appear hunched, with a rounded back. To perform kyphoplasty, the surgeon inserts and then inflates a special balloon into the fractured vertebrae to create a cavity within the bone. The cavity is then filled with a special bone cement to strengthen the bone. After the procedure, most patients report a dramatic improvement in pain, quality of life, and the ability to participate in everyday activities.