What is Herniated Disc?

What is Herniated Disc ?

Herniated discs are extremely common back injuries. Herniated disc disease is due to a change in the structure of the normal disc. Most of the time, disc disease comes as a result of aging and the degeneration that occurs within the disc. Occasionally, severe trauma can cause a normal disc to herniate. Trauma may also cause an already herniated disc to worsen. They occur when the thick outer layer (annulus fibrosus) of an intervertebral spinal disc bulges or ruptures. Sometimes, the gel-like interior of the disc (nucleus pulposus) will actually break through the outer layer and leak out into the body. This is called a ruptured or extruded disc. 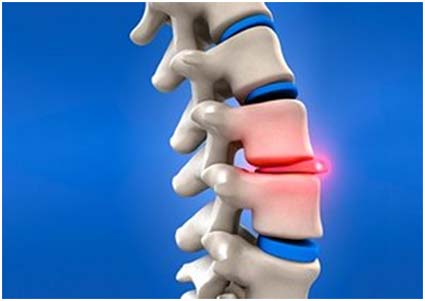 The intervertebral disc is composed of two parts, including the following:

People who are between the ages of 30 and 50 are, statistically, more likely to experience herniated disc problems. Men are also more likely to have the problem of herniated disc compared to their female counterparts and this likelihood is increased when men participate in heavy amounts of physical activity.

Discs are primarily composed of water .As we become older the water content decrease, so the discs begin to shrink and lose their shape. When the disc becomes smaller the space between the vertebrae decreases and become narrower. Also, as the disc itself becomes less flexible. While aging excess weight, improper lifting and the decrease in water in the disc all contribute to the breaking down of discs the primary cause of a herniation or bulge is uneven compression and torsion that’s placed on the discs .This uneven pressure is caused by imbalances in the muscles that pull the spine out of its normal position and then your body is forced to function in what we call a physical dysfunction. Every human being develops this dysfunction overtime and eventually they cause enough damage to create pain. 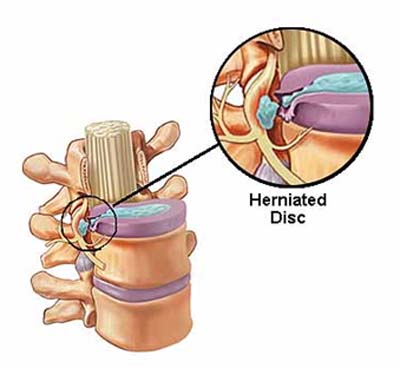 The common symptoms of Herniated Disc include:-

Pain and numbness of leg is caused due to pressing of herniated discs against the nerves present in the spine.

A thorough clinical evaluation to determine the character and loction of the pain plus an examination of the neck and careful assessment of any weakness, loss of sensation or abnormal reflexes can often diagnose and locate a disc herniation.

The doctor's diagnosis can be confirmed by using X-ray imaging, computed tomography (CT) scans or magnetic resonance imaging (MRI). The X-ray image can show bone spurs and narrowing of the disc space as the spine ages and deteriorates, but cannot show a disc herniation or nerves in the spine. The CT and MRI scans provide more detailed pictures of all the spinal elements (vertebrae, discs, spinal cord and nerves) and can identify most disc herniations.

Additionally, electrical (nerve conduction) studies may be performed to look for signs or evidence of nerve damage that can result from a disc herniation.

If after non-surgical treatment the patient still has intolerable pain, or if there is evidence of neurological deficit (e.g. weakness in the calf muscles) then we may recommend surgery to treat the disc herniation. Non-surgical treatments can include the use of electrical stimulation, pain medication, cold and hot compresses, a decrease in the activity that typically causes pain, acupuncture, and visits to a chiropractor. Some of the more common surgical procedures are called laminotomy, laminectomy, discectomy, and micro discectomy.

Spine fusion is rarely necessary when a disc is herniated for the first time. If necessary, the space left by the removed disc may be filled with a bone graft - a small piece of bone usually taken from the patient’s hip. The bone graft or a bone substitute is used to join or fuse the vertebrae together. In some cases, specially designed instrumentation (such as rods or screws) may be used to help promote fusion and to add stability to the spine.   Read More >>