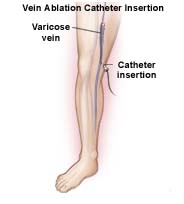 The treatment sends bursts of radiofrequency or laser energy through a catheter; the resulting heat intentionally destroys vein wall tissues along the length of the vein.

Vein ablation relieves symptoms associated with painful varicose veins, improves the appearance of the legs, and has a low risk of side effects.

Varicose veins occur when weak veins near the surface of the leg stretch, bulge, and twist. Varicose veins can be visible through the skin.

Left untreated, varicose veins can cause:


When is it indicated?

First, the physician examines the legs using duplex ultrasound to decide whether varicose vein ablation is appropriate and is likely to improve symptoms.

The patient does not need to do any special preparation for the procedure.

Pregnant women who want to treat varicose veins should wait 6 weeks after giving birth before scheduling therapy, because pregnancy-induced varicose veins may fade.

Having thin or muscular legs or veins close to the surface of the skin may increase the risk for minor burns from the procedure.

Occasionally, the patient may experience brief pain if the radiofrequency catheter or laser heats tissue near a nerve. This pain disappears once the physician moves the catheter.

The procedure takes about 60 minutes and may relieve symptoms immediately.

Patients can resume normal activities immediately after the procedure but should avoid strenuous activities such as lifting more than 10 pounds for 1 to 2 weeks.

Thigh-high prescription compression stockings are applied immediately after the procedure. The patient wears the stockings for 1 week.

Minor bruising, burns, or soreness may occur after vein ablation.

Few serious complications have been reported.

In theory, any procedure that destroys vein tissue can trigger deep vein thrombosis (DVT) in patients who are susceptible. However, no cases of DVT following vein ablation have been reported to date.

Less than 10 percent of varicose veins treated with vein ablation return after 2 years.