A stroke occurs when the blood supply to a part of your brain is interrupted or severely reduced, depriving brain tissue of oxygen and nutrients. Within a few minutes, brain cells begin to die.

Stroke is a medical emergency, and prompt treatment of a stroke is crucial. Early treatment can minimize damage to your brain and potential stroke complications.

The good news is that strokes can be treated, and many fewer Americans now die of strokes than was the case 20 or 30 years ago. Improvement in the control of major risk factors for stroke — high blood pressure, smoking and high cholesterol — is likely responsible for the decline.

Watch for these stroke symptoms if you think you or someone else is having a stroke :

For most people, a stroke gives no warning. But one possible sign of an impending stroke is a transient ischemic attack (TIA). A TIA is a temporary interruption of blood flow to a part of your brain. The signs and symptoms of TIA are the same as for a stroke, but they last for a shorter period — several minutes to 24 hours — and then disappear, without leaving apparent permanent effects. You may have more than one TIA, and the recurrent signs and symptoms may be similar or different.


A TIA may indicate that you're at risk of a full-blown stroke. People who have had a TIA are much more likely to have a stroke than are those who haven't had a TIA.


When to see a doctor

If you notice any signs or symptoms of a stroke or TIA, get medical help right away. A TIA may seem like a passing event. But it's an important warning sign — and a chance to take steps that may prevent a stroke.

If someone appears to be having a stroke, watch the person carefully while waiting for an ambulance. You may need to take additional actions in the following situations :

Every minute counts when it comes to treating a stroke or TIA. In fact, sometimes a stroke is referred to as a "brain attack" to convey that, similar to a heart attack, quick care is important. So, don't wait to see if the signs and symptoms go away. The longer a stroke goes untreated, the greater the damage and potential disability. The success of most stroke treatments depends on how soon a person is seen by a doctor in a hospital emergency room after signs and symptoms begin. 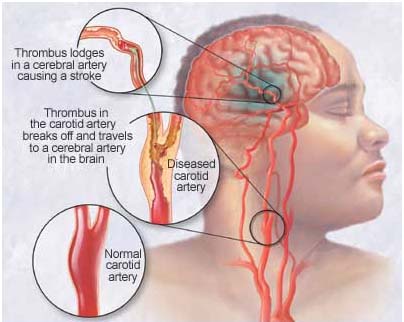 Ischemic stroke occurs when a blood clot (thrombus) blocks or plugs an artery leading to the brain. A blood clot often forms in arteries damaged by the buildup of plaques (atherosclerosis). It can occur in the carotid artery of the neck as well as other arteries.

About 80 percent of strokes are ischemic strokes. They occur when the arteries to your brain are narrowed or blocked, causing severely reduced blood flow (ischemia). This deprives your brain cells of oxygen and nutrients, and cells may begin to die within minutes. The most common ischemic strokes are:

"Hemorrhage" is the medical word for bleeding. Hemorrhagic stroke occurs when a blood vessel in your brain leaks or ruptures. Hemorrhages can result from a number of conditions that affect your blood vessels, including uncontrolled high blood pressure (hypertension) and weak spots in your blood vessel walls (aneurysms). A less common cause of hemorrhage is the rupture of an arteriovenous malformation (AVM) — an abnormal tangle of thin-walled blood vessels, present at birth. There are two types of hemorrhagic stroke :


TIA has the same cause as an ischemic stroke. In ischemic strokes, which are the most common type of stroke, a clot blocks the blood supply to part of your brain. But in contrast to a stroke, which involves a more prolonged lack of blood supply and causes some permanent damage to your brain tissue, a TIA doesn't leave lasting effects to your brain. Still, if you've had a TIA, it means there's likely a blocked or narrowed artery leading to your brain, putting you at a greater risk of a full-blown stroke that could cause more permanent damage. If you're having a TIA, get emergency medical treatment and make sure your regular physician knows about it.


Other factors that can increase your risk of stroke include heavy or binge drinking and the use of illicit drugs such as cocaine.

Depending on how long the brain suffers a lack of blood flow, a stroke can sometimes cause temporary or permanent disabilities. Stroke complications differ depending what part of the brain was affected and may include :

People who have a stroke may also become withdrawn and less social. They may lose the ability to care for themselves and may need a caretaker to help them with their grooming needs and daily chores after a stroke.


As with any brain injury, the success of treating these complications will vary from person to person.

If you've had a previous stroke or TIA or think you're at risk of stroke, talk with your doctor about screening tests. Before treating a stroke, your doctor must figure out what type of stroke you're having and what parts of your brain it's affecting. Other possible causes of your symptoms, such as a tumor, also need to be ruled out as a cause.


The following are most often used as screening tools to determine your risk, but they may also be used as diagnostic tools if you're having a stroke:

Getting prompt medical treatment for stroke is important. Treatment itself depends on the type of stroke.

Emergency treatment with medications : Therapy with clot-busting drugs must start within three hours. Quick treatment not only improves your chances of survival, but may also reduce the amount of complications resulting from the stroke. You may be given :

Other blood-thinning drugs, such as warfarin (Coumadin) and heparin also may be given, but they aren't as commonly used as aspirin.

Surgical and other procedures.

Your doctor may recommend a procedure to open up an artery that's moderately to severely narrowed by plaques. This may include:

Surgery may be used to treat a hemorrhagic stroke or prevent another one. The most common procedures — aneurysm clipping and arteriovenous malformation (AVM) removal — carry some risks. Your doctor may recommend one of these procedures if you're at high risk of spontaneous aneurysm or AVM rupture :

Stroke survivors who go home to a healthy spouse or other companion are more likely to become independent and productive again. Encouragement and early treatment are important.

Recovery and rehabilitation depend on the area of the brain involved and the amount of tissue damaged. Harm to the right side of the brain may affect movement and sensation on the left side of the body. Damage to brain tissue on the left side may affect movement on the right side; this damage may also cause speech and language disorders. In addition, people who've had a stroke may have problems with breathing, swallowing, balancing and hearing, and loss of vision and bladder or bowel function.

Every person's stroke recovery is different. Depending on what complications you might have, the team of people to help you in your recovery could include :

Recovering from a stroke can be mentally exhausting. In addition to the various physical side effects, feelings of helplessness, frustration, depression and apathy aren't unusual. Diminished sex drive and mood changes also are common.

How quickly you recover from a stroke depends on the extent of damage to your brain, and the intensity and duration of the therapy you receive. But your recovery also is likely to be influenced by your personality, life experiences and coping styles. Your own motivation to recover is a key factor in obtaining an optimal level of rehabilitation.

If someone close to you has had a stroke, you can help by offering companionship and support. Here are some tips to help you communicate with someone whose speech has been affected by a stroke :


Although stroke-related disabilities can be permanent, many people lead active lives after a stroke. Many are able to resume everyday life and responsibilities.