Pulmonary embolism is a condition that occurs when an artery in your lung becomes blocked. In most cases, the blockage is caused by one or more blood clots that travel to your lungs from another part of your body.

Most clots originate in your legs, but they can also form in arm veins, the right side of your heart or even at the tip of a catheter placed in a vein. There are other rare causes of clots as well.

Pulmonary embolism symptoms can vary greatly, depending on how much of your lung is involved, the size of the clot and your overall health — especially the presence or absence of underlying lung disease or heart disease.

Common signs and symptoms include :


Other signs and symptoms that can occur with pulmonary embolism include :

hambers and valves of the heart 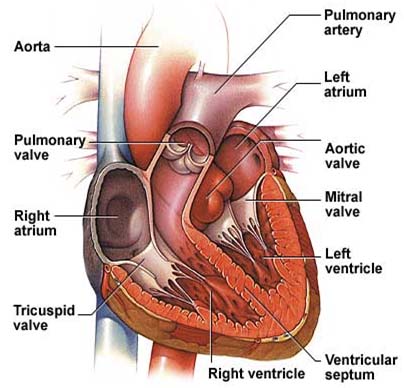 Your heart is composed of two upper and two lower chambers. The upper chambers (the right and left atrium) receive incoming blood. The lower chambers, the more muscular right and left ventricles, pump blood out of your heart. The heart valves — which keep blood flowing in the right direction — are gates at the chamber openings. 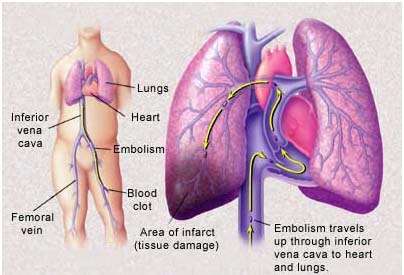 Clots that form in the veins throughout your body can dislodge, travel through the bloodstream to the right side of the heart, and then enter the pulmonary arteries, where they may cause a blockage. A blockage can occur in any small artery, but the lungs are especially vulnerable because all of the blood in the body passes through the lungs every time it circulates. Most often, a number of clots will shower your lungs during an episode of pulmonary embolism; it's unusual for just one clot to take place.

A blood clot is a plug of platelets — colorless blood cells that repair injured blood vessels — enmeshed in a network of red blood cells and fibrin, a type of protein. Clots normally develop to help stop bleeding after you've been cut or injured, but sometimes clots form for no apparent reason.

A blood clot that forms and remains in a vein is called a thrombus. A clot that travels to another part of your body is an embolus. Occasionally other substances, such as pieces of a tumor, globules of fat from fractured bones or air bubbles, may enter the bloodstream and become an embolus that blocks arteries.

Most clots that cause problems originate in a vein in your leg or pelvis. The affected vein may be near the surface of your skin (superficial thrombosis) or deep within a muscle (deep vein thrombosis, or DVT). Clots in superficial veins usually aren't serious and often clear on their own. But clots in the deep veins may detach and migrate through your bloodstream to your lungs.

The majority of clots in the legs begin in the veins below the knee, and it's uncommon for these clots to detach. But sometimes clots may extend up into the thigh, and that's when they tend to become dangerous. It's not known what causes clots to detach, and it's not possible to predict which clots will break off or when.

About half the people who develop abnormal blood clots have an inherited tendency to do so. Other factors that may cause unwanted clots to form include:

Although anyone can develop blood clots and subsequent pulmonary embolism — together known as venous thromboembolism (VTE) — the following factors increase your risk :

Pulmonary embolism can be difficult to diagnose, especially in people who have underlying heart or lung disease. For that reason, your doctor will perform one or more tests to help find the cause of your symptoms. These tests may include the following :

In addition to tests that check for pulmonary embolism, you may also have tests that help detect blood clots in your veins, such as :

Pulmonary embolism can lead to several serious complications, including :

Prompt treatment of venous thromboembolism — the term used to refer to both pulmonary embolism and deep vein thrombosis — is essential in order to prevent serious complications or death.

A pair of anticoagulants

Initially you'll receive the fast-acting anticoagulant heparin, administered intravenously or under your skin (subcutaneously), which immediately helps prevent existing clots from enlarging and stops the formation of new ones. Your doctor is also likely to prescribe the anticoagulant warfarin, a pill that is given by mouth. Warfarin also helps stop clot formation, but because it works less quickly than heparin does, both drugs must be overlapped for at least five days, until the warfarin effect alone is enough to prevent clot formation.

After the original clot has dissolved, you'll likely continue to take an anticoagulant medication. How long depends on your particular case. If you have a chronic disorder that puts you at high risk of pulmonary embolism, you may need to stay on these drugs indefinitely. In general, though, you take them for at least three to six months.


Benefits, but risks as well

As with all medications, the benefits of anticoagulants need to be weighed against the risks. Heparin and warfarin reduce your chance of developing blood clots, but because they may also prevent normal blood coagulation, they increase your risk of bleeding complications. Many of these complications are minor, such as bleeding from your gums, but some may be severe and life-threatening. If you're on warfarin, your doctor will ask you to have periodic blood tests to check how well the drug is working.

During anticoagulant therapy, avoid using aspirin unless you have heart disease and your doctor instructs you to continue taking a low dose. Also avoid other nonsteroidal anti-inflammatory drugs such as ibuprofen, which also affects your blood's ability to clot. Because more than 100 other drugs, including over-the-counter medications and some herbs, can interact with anticoagulants, be sure your doctor knows all the medications you're taking.


When pulmonary embolism is life-threatening

If you experience a massive pulmonary embolism, if you have worsening cardiopulmonary disease, or if other treatments aren't effective, one of the following therapies may be an option :