Osler-Weber-Rendu syndrome is an inherited disorder of the blood vessels, which can cause excessive bleeding. The syndrome is also called hereditary hemorrhagic telangiectasia, or HHT. 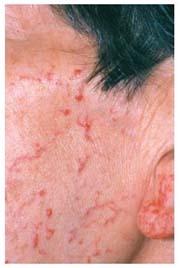 Osler-Weber-Rendu syndrome is inherited as an autosomal dominant trait. The condition can affect males or females of any ethnic or racial group.

The syndrome is genetic, which means it results from a broken or missing gene. Scientists have identified some of the genes involved, but do not know exactly how the gene defects lead to the abnormal blood vessels seen in persons with this syndrome.

Frequent nosebleeds in children may be an early symptom.

Telangiectases may not appear until puberty. They can bleed easily and may be seen on the tongue, lips, nasal mucosa, face, ears, fingertips, nails, whites of the eyes, and skin.

There may be GI bleeding, including loss of blood in stool or dark black stools.

Bleeding into the brain may cause symptoms such as seizures or unexplained, small strokes. Severe bleeding can be deadly.

Some patients only discover that they have this condition when they cough up blood and a chest x-ray shows a spot on the lung called an arteriovenous malformation (AVM). Large or multiple AVMs can cause shortness of breath.

An experienced health care provider can detect telangiectases during a physical examination. There is often a family history of hereditary hemorrhagic telangiectasia.


Genetic testing may be available for mutations in the endoglin or ALK1 genes.

Surgey is needed to treat bleeding in some areas. Frequent or heavy nosebleeds may be treated with electrocautery or laser surgery.

Endovascular embolization may be needed to treat abnormal blood vessels in the brain and other parts of the body.

Some patients respond to estrogen therapy, which can reduce bleeding episodes. Blood-thinning medications should be avoided. Some patients may need to take antibiotics before having dental work or surgery. Ask your doctor what precautions you should take.

Unless there is life-threatening intracranial hemorrhage, persons with this syndrome can live a completely normal lifespan.

Genetic counseling is recommended for prospective parents with a family history of hereditary hemorrhagic telangiectasia. Certain types of strokes and heart failure can be prevented with medical treatments.