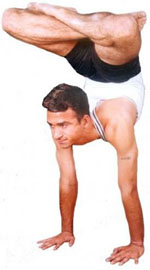 Indiahealthtour.com recommends the patient(s) to practice yoga in general life and even after procedure or surgery in the hospital / post hospital stay ( as per the doctors recommendation). Indiahealthtour.com shall arrange for a qualified yoga instructor to impart the training at the patient's request. This service is optional.

The practice of pranayama, the correct breathing technique, helps to manipulate our energies. Most of us breathe incorrectly (only thoracically not using our abdomen, thereby utilizing only half of our lung capacity). Pranayama is a technique where in it re-educates our breathing process, helps to release tensions and develop a relaxed state of mind. It balances our nervous system, reduces the need for sleep and encourages creative thinking. Increasing oxygen to our brain, improves mental clarity, alertness and physical wellbeing.

Yoga nidra is a form of medication. Performed while lying on the back in the shavasana pose, it relaxes the physiological & psychological systems. This technique completely rejuvenates the body & mind, giving a sense of wellbeing.

This ancient health & fitness practice provides both physical & mental therapy. It considers ageing as largely an artificial condition, caused mainly by autointoxication or self-poisoning. By keeping the body parts clean and well lubricated, cell deterioration can be greately reduced. To get the maximum benefits of yoga one has to follow three main guidelines i.e. practice of asanas, pranayama and yoga nidra.

With the regular practice of asanas, we control our cholesterol level, reduce weight, normalise blood pressure and improve cardiac performance. Asanas harmonize our mental energy flow by clearing any blockages in the subtle body, leading to mental equilibrium & calmness.

The eight stages of yoga stated by Patanjali:

Besides the different stages in yoga, there are various forms of discipline touching different aspects of human life. These disciplines include

Gyanayoga or Dhyana yoga (exercise for the mind & intellect)

Yoga is a system of exercises for the physical & mental well being. It combines stylised poses with deep breathing and meditation. The term yoga itself is derived from a Sanskrit word meaning 'to join together'. The ultimate aim of yoga it to unite the human soul with the universal sprit

Yoga was developed about 5 thousand years ago. Its founders were great Sages who carried out intense feats of physical and mental concentration. Yoga has its origins in the Vedas, the oldest records of Indian culture. The great Indian sage Patanjali who described a series of postures or Asanas, which the student gradually tries to attain, systematized it. Maharishi Patanjali rightly called as the "Father of Yoga" compiled and refined various aspects of Yoga systematically in his "Yoga Sutras" (aphorisms). He advocated the eight-fold path of Yoga, popularly known as "Ashtanga Yoga" for the all-round development of the human personality.

According to Patanjali, within the human body there are channels called Nadi & centres called chakra. If these channels & centres are tapped, energy hidden in the body can be released. This energy is called kundalini.

Gurus such as Bikram Singh have coined their own brand of Bikram Yoga and popularized it. It continues to be practiced in the traditional way in India and its gentle stretching and mental concentration exercises have been proven to have a beneficial effect on the body and mind. Each posture or asana exercises some of the muscles of the body and combinations of these asanas can provide you with a complete physical and mental workout routine.

Asanas such "Suryanamaskara," an invocation to the Sun god can be the ideal way to start your day. Savasana while involves meditation while lying flat on ones back, can provide relief from stress and restore you to a sense of calm.

There are many ashrams across India where Yoga is practiced. Yoga is not merely a form of exercise or meditation but is a complete health giving system that will keep you fit as you travel on your journey through life.